Driver blogger September 23, 2017 Last Updated 2018-11-08T04:26:31Z
The Internet was giving a great impact for the whole world, especially in countries with a fast Internet connection and stable. The Internet also participated in donate to the growth of smartphones. Internet speed will vary within a country there are low, there is high, and there are higher again.

Today the internet has become a necessity in human life are mainly living in urban areas. Now in the corner of the village not to be outdone by the developments in the city put up a Wi Fi network. Moreover, within a State that has been noted as the country with the fastest internet access. 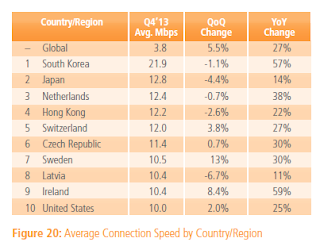 Internet connection speed is measured with the amount of bits per second (bit per second) that will determine or distinguish more quickly which. Therefore in the year 2017, we note the 7 countries with the world's fastest internet access, as follows,

Although still listed have a difference in doctrine and in conflict with its neighbours North Korea, South Korea recorded country able to improve internet access reach 1.6 percent. The country also claimed to be able to bring the average access speed reached 22.2 Mbps.

Improvements in all sectors in the country of Japan, proving that Sakura is able to provide increased access to the internet amounted to 16 percent over the previous year. Japan also recorded with access speed reaches 15, 2Mbps.

Country Sweden was able to increase the speed of internet access in area reached 34 percent, thereby giving notes that this country can provide access speed up to reach 14.6 Mbps.

Are on the list to the top five in the list of countries with the fastest internet connection, Switzerland was recorded with access speeds reach 14.5 percent. A little different with the Netherlands, but his Government was able to increase the speed of reaching 21 percent this year.

State of the Baltic region of Northern Europe, Latvia has a recorded speed of access reach 13Mbps. Such access also recorded increased by 25 percent over the previous year.
7 Countries with the world's fastest Internet access Diposkan Oleh:
Posted by: Driver blogger
Driver blogger, Updated at: September 23, 2017