Heartburn is a feeling of pain or discomfort in the stomach area consisting of several groups of symptoms in the digestive system, especially in the upper abdomen. In addition, patients also often complained about the presence of feeling uncomfortable while eating, stomach feels full, sense of fullness at the beginning of the meal, a sense of burning in the abdominal area and chest, as well as the stomach feels contains gases. Heartburn is generally a disease that recurs as well as recurrence often occurs. 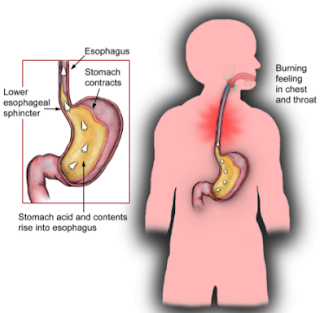 The main symptom of heartburn is pain in the solar plexus, belching, nausea, vomiting, regurgitation (food or gastric fluid coming out of mouth through esophagus), abdomen feels bloated, decreased appetite, chest feels on fire, and the stomach feels swell. The symptoms are often diperberat after eating.

The cause of the occurrence of heartburn is the production of excess stomach fluids, peptic ulcers or sores on stomach area, depression or anxiety, inflammation in the stomach, lactose intolerance (not able to digest milk or dairy products), the side effects of a substance (caffeine , alcohol or drugs), gastroesophageal reflux disease (syndrome of soaring food and fluid contents of the stomach through the esophagus), and swallow excess air.

Heartburn can be treated with lifestyle change, such as:
Consumption of foods with portions a little but often than consuming large amounts of food with as many as three times a day;
Avoid foods that can be relaxes the muscles of the esophagus and the stomach such as chocolate, mint, and alcohol;
Avoid foods that stimulate the stomach such as spicy foods, high acid levels (such as tomatoes and oranges), as well as coffee.
Don't smoke;
After eating, wait 2 to 3 hours before lying down, and avoid the consumption of snacks before bed at night.
If symptoms of heartburn arise at night, the symptoms can be reduced by elevating the head with a height of 6 to 8 inches with pillows;
Avoid dressing that is too tight;
Reducing weight can help reduce the symptoms of heartburn.
HEARTBURN Diposkan Oleh:
Posted by: Driver blogger
Driver blogger, Updated at: February 10, 2018